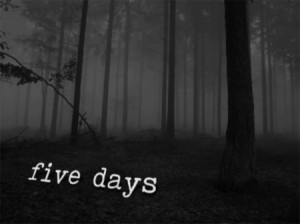 Five Days is an interactive performance-based virtual world. The actor/performer views the world through a head-mounted VR display. The position and orientation of the VR headset is recorded by a magnetic tracker attached to the goggles, giving the actor real-time control of the in-world camera via head-movement. In addition to controlling the perspective of the virtual camera, the actor holds magnetic trackers in each hand that control the hands of the virtual character. This allows the actor to interact directly with the world during the performance.

The video below is a recording of a performance of Five Days taken from the video feed coming out of the VR goggles. The performer is in full control of the virtual camera and the character’s hands and movements, all in real-time. Five Days was one of a handful of worlds featured the the 2010 BVW show, becoming the first virtual world in the history of the Building Virtual Worlds course to require that the end-of-semester show have a content advisory for younger or squeamish audience members.